Now, even with COVID cases still raging in many parts of the U.S. and the world, some 200 million Americans (out of 330 million) have received at least one dose of vaccine — and the travel industry is moving into… END_OF_DOCUMENT_TOKEN_TO_BE_REPLACED Rejected by some Pacific islands — the virus by now had struck several other cruise ships, which were all seeking safe havens and, in many cases, being turned away —… END_OF_DOCUMENT_TOKEN_TO_BE_REPLACED

How to Choose the Right Cruise Cabin For You The Deluxe Veranda staterooms on Viking Ocean ships are terrific, if you can afford them. Photo from Viking Cruises.

Note: This is the first in a series of posts about how to get the best value for your cruise dollar.

Which cabin you choose can mean a difference of hundreds or even thousands of dollars in your cruise fare. Along with the general luxury level of the cruise line itself, the length of your cruise — and your ability to restrain yourself at the casino, bar, or art auction — your cabin category is likely to be the main variable in the entire cost of your cruise.

How do most cruise lines price their cabins and suites? Three general rules usually come into play: The good news is, Bucket List items don’t have to involve super-strenuous exertion. In fact, according to a recent TotallyMoney.com survey of 1,000… END_OF_DOCUMENT_TOKEN_TO_BE_REPLACED My wife, Catharine, and… END_OF_DOCUMENT_TOKEN_TO_BE_REPLACED 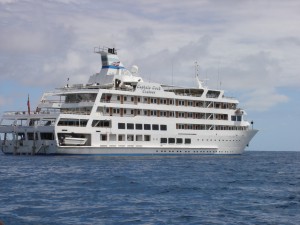 Repositioning cruises can be some of the best bargains at sea. Photo by Clark Norton

Every fall and spring, a number of ocean-going cruise ships leave one area of the world — say, Europe, Canada, or Alaska in the fall — for another, such as the Caribbean, South America, or Hawaii, to take advantage of the warmer winter waters in the latter spots.

These are called repositioning cruises (repo cruises for short), and they tend to be longer — sometimes quite a bit longer — than a typical cruise.

The cruise lines don’t want to run the ships empty, of course, so they sell the cabins often at  much-reduced rates, especially considering the length of the voyages.  You might find a 17-day October repositioning cruise from Italy to Brazil, for example, for about the same price as a regular 10-day cruise.

Sailing in the Lap of Luxury Aboard Europa 2

The Europa 2 Sails the Mediterranean. Photo from Hapag-Lloyd Cruises.

On board the Europa 2, Hapag-Lloyd’s elite new cruise ship, I got a taste of what it might be like to sail the Mediterranean on my own private yacht.

Entering the Sicilian port of Trapani on the first morning, I arrived at the ship’s indoor-outdoor buffet as it opened for breakfast. With no other passengers in sight, I was greeted by a phalanx of servers and a cheery chorus of “Guten Morgens” and “Good mornings” (Hapag-Lloyd is a German line, but Europa 2’s crewmembers are bilingual).

For the next several minutes, I sat alone on deck overlooking the sea and the city, basking both in the early morning sun and the full attentions of the eager-to-please crew, who proffered cappuccinos, freshly squeezed juices, cooked-to-order omelets – anything I wanted.

Later in the cruise, when I went for… END_OF_DOCUMENT_TOKEN_TO_BE_REPLACED

Rolling Down the Mississippi with American Cruise Lines

River cruising is the hottest trend in the cruise world right now, and not just in Europe. It’s also thriving right here in the United States — and the aptly named American Cruise Lines (ACL)  is leading the
way.

ACL has ships cruising the Columbia River in the Pacific Northwest, the Hudson River in upstate New York, the Intracoastal Waterway in the Southeastern U.S., and many more.

But my wife, Catharine, and I were most intrigued by ACL’s cruise down the lower Mississippi — from Memphis to New Orleans — partly because it was an area of the country we hadn’t explored as much as some others, and partly because the ship, the Queen of the Mississippi, was built in the style of an old-fashioned paddle wheeler, allowing us to return to Mark… END_OF_DOCUMENT_TOKEN_TO_BE_REPLACED You won’t find fluff, puff or snark in these 752 pages… END_OF_DOCUMENT_TOKEN_TO_BE_REPLACED