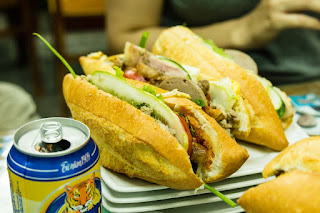 As usual, this post is illustrated by the photos of Myles’ wife, Aimee.

Anthony Bourdain, the chef/journalist, considers Viet Nam his emotional and culinary home, and has filmed several episodes in the country for his various shows over the years.

He really loves this place, and it’s easy to see why. Amazing food is waiting for you on literally every street corner. About five years ago, one of those street corners had a banh mi cart on it, and 95 seconds on the travel channel changed the owner’s life.

These days, Banh Mi Phuong (the owner’s name) has grown way beyond a corner stand. It’s packed from 6:30 AM to 9:30 PM with both locals and tourists grabbing what may literally be the best sandwich in the world. 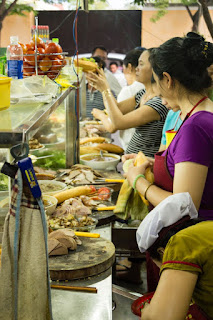 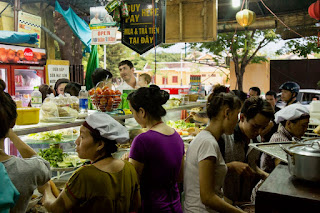 If you can brave the crowd and the cacophony, you will be rewarded.

The night we returned from Hue, dinner was at a French-Vietnamese restaurant downtown.
It wasn’t bad, but I’ve become so enamored with $0.75 street food that fancy restaurants seem a bit underwhelming, especially for the price. Four dollars for a meal?! What is this, New York City?!

A Day at Cooking School

The food in Hoi An is so renowned that people come from all over the world to study it. That means literally every restaurant in town also functions as a cooking school before the customers come in.

Some classes are better than others, but the most famous restaurants often have 20-25 people in a class, and that didn’t really appeal to us. But something much better fell on our lap.

Early in our trip, we were walking around our neighborhood and came across a small, nice-looking restaurant. We stopped in for a quick bite, and had some slow-cooked pork bites (essentially open-faced banh mi) that could easily stand up to the fanciest restaurants in New York or San Francisco. Seriously, it may have been one of the best dishes that I have ever had.

So we asked if they offered a cooking class, and of course they did. We didn’t know how big the class would be, how well the chef could teach, or what we would be cooking. But with a meal like that, we were willing to take our chances. And it couldn’t have worked out any better.

We showed up at the restaurant at 8 AM to meet Nguyen (pronounced Win), the owner and head chef. He was immediately endearing, and bursting with energy. It was clear that he loved to both cook and share his secrets with anyone who asked. This was going to be fun.

Like every meal in Hoi An, ours started with a trip to the market to pick up the day’s ingredients. We had been to the market several times previously, but having a local tour guide was infinitely more helpful.

We learned that locals never buy fish after 9 AM (for obvious reasons), but the butchers bring fresh meat every two hours (so it’s safe to buy all day).

We learned to look at a fish’s eyes before you buy it. Freshly caught fish have bright, shiny eyes, whereas fish with cloudy eyes will make you wish you chose the chicken.

Nguyen also told us about the five elements of balance (fire, water, metal, wood, and earth), and explained how the best recipes are inspired by the same principles. In other words, food should have sweetness, spiciness, saltiness, crunchiness, and all other components in a nice balance.

The market was definitely not for the faint of heart, but it really was a sight to see.

Nothing is wasted. Every part of the animals and plants were available for sale, and we left with herbs, veggies, fish, and meats to supply his restaurant for the day. We left a bit of our innocence behind, but now we’re able to look a fish in the eye as we eat it.

Back in the kitchen, Nguyen showed us cooking basics, like how to hold a knife and how to not cut your finger off. Useful stuff. 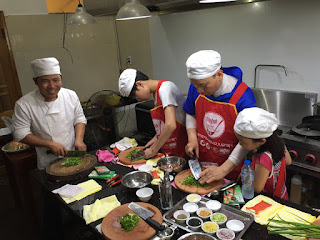 We were joined for the class by a lovely family wearing clothing brands I recognized from our quick stop in Japan. I was so excited to share my three words of Japanese with them, even though they probably didn’t want any coffee.

They politely laughed, but didn’t say much for the next few minutes, until it casually came up that they were actually Korean. They were cool about it; I was redder than the aprons.

But thankfully, we didn’t have much time to waste on awkward introductions. We jumped right in to the first course, a mango papaya salad. It was as good as it sounds. 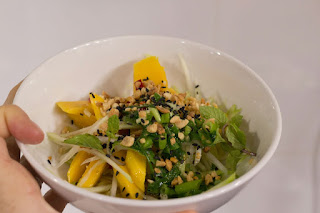 This was me learning how to cut my first mango the Vietnamese way. 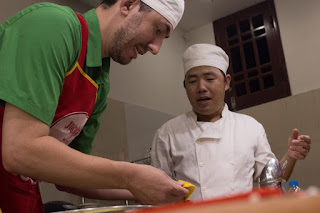 Faces not posed. Thanks, Aimee.

Meanwhile, we were simmering a pot of pho made from scratch. 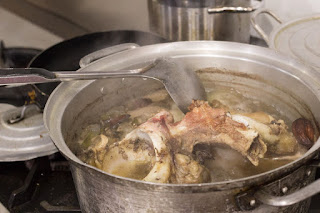 Nguyen, showing us the perfect way to fry a spring roll. 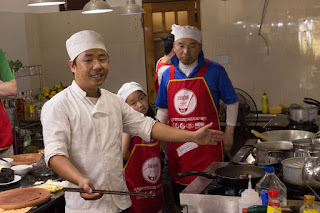 No photos of the spring rolls, because we ate them all immediately. As in right out of the boiling oil. Worth it.

We learned that spring rolls are fried and traditionally eaten in the spring.

Summer rolls are fresh, and eaten when it’s too hot outside to want anything deep fried. Seems obvious, but I never put that together.

This is Aimee preparing our next course. 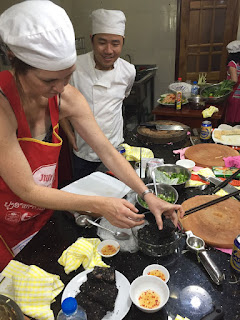 It was seared ahi coated with black sesame in a coconut lime sauce. 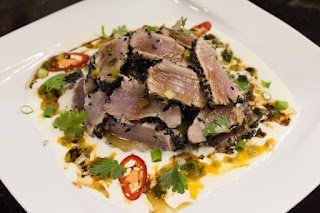 It lasted all of about 15 seconds on our plate.

And of course we can’t forget the pho! We went back to the broth that had been simmering since we got back from the market. I couldn’t get over that a pot of water turned into this. 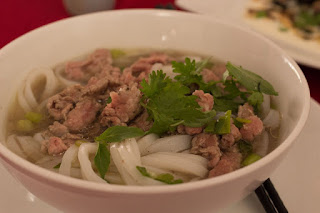 The most authentic way to eat pho is to get fresh beef straight from the market, slice it paper thin, and dip it in the boiling broth for just a few seconds to cook it. It was an absolutely delicacy that will make it even harder to leave this country.

Nguyen was such an earnest and friendly host that we could have heard him talk about folding napkins for four hours and still have had a wonderful time. But the fact that we can butcher cook these dishes at home is an exciting bonus.

And speaking of being at home, Nguyen’s restaurant was on the ground floor of his home (where his parents also live). So every ten or fifteen minutes, Nguyen’s 70ish year old mom (and sole cooking teacher) would walk by to tell him to throw more onions is the broth, cut the meat thinner, or roll the spring rolls tighter.

Here we are in the kitchen of probably the best chef I’ve ever eaten from, in a restaurant that can stand up to anything Michelin rated, and he’s still catching flack from his mom. It was adorable, and it made the experience that much more amazing.

Note: You can follow more of Myles’ adventures in Viet Nam and elsewhere at his blog, Myles Away From Ordinary.

6 Responses to The Glories of Vietnamese Food