When Traveling, Respect Other Cultures You may have heard the story: Ten foreign tourists — a group of Canadians and Europeans — climbed Mount Kinabalu in Sabah, East Malaysia (on the island of Borneo), on May 30 and celebrated by stripping naked at the summit.

At 13,400 feet, Kinabalu is the highest peak between the Himalayas and New Guinea. The region is also a World Heritage Site and considered sacred by the local people, known as the Kadazan Dusun.

By coincidence, bad timing, or otherwise, the Kinabalu area suffered a destructive 5.9 earthquake on June 5, killing 18 people — mostly youngsters on a hiking trip.

The local people in Sabah do not consider it coincidence. They believe the nudity (and urination that was also reported) angered the mountain and nearby forest spirits and prompted the earthquake.

Four of the tourists — two Canadian siblings, a young British woman, and a Dutch man were arrested and charged with committing an act of public indecency. They were jailed for three days, fined about U.S. $1,300, and deported back to their home countries on June 13.

They could actually consider themselves lucky – if left up to the indigenous Native Court, the punishment could have been much greater. (One local suggested that a fine of ten buffalo – no doubt a princely sum — would be appropriate.) The summit awaits for Mt. Kinabalu climbers. Photo by Samantha on flickr.

The Instigator Got Away

But the apparent instigator of the stunt, a 35-year-old Canadian named Emil Kaminski, who has a website called Monkeetime and calls himself the “Perpetual Backpacker,” apparently left the country before he could be caught. Which is ironic because it was his naked photos of the group, posted on his Facebook page, which largely led to the local outrage.

Kaminski has made it very clear on his website and his many Youtube videos that he disdains any local customs that he considers “superstitious” or “stupid.” In fact, he and his group told the guide to “go to hell” when he warned them against stripping on the mountain. And he labeled Sabah’s Tourism Minister an “idiot” for decrying the act.

Climbers are typically briefed before ascending Kinabalu about the need to respect the mountain, and the guide had issued stern warnings, so the ten foreigners couldn’t have been ignorant about the nature of the offense. (The British woman has subsequently apologized.)

However you may feel about mountain spirits causing earthquakes in response to these kinds of stunts — and most North Americans and Europeans would indeed regard them as superstition — that is, in fact, what the Kadazan Dusun believe. And in Malaysia in general, public nudity (on a sacred mountain or not) can result in stiff jail sentences.

Westerners may not agree with these strictures or beliefs. But assuming that local customs (wherever in the world) aren’t rooted in reprehensible practices like child sex slavery, forced prostitution, or human sacrifice, I believe foreign tourists — as guests of other countries — have a duty to respect them, and certainly not to flaunt them as Kaminski does.

After all, isn’t learning to appreciate other cultures one of the main reasons we travel? 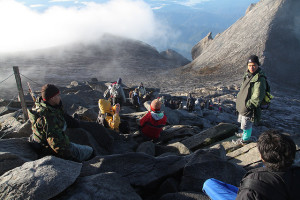 These Kinabalu climbers managed to keep their clothes on at the summit. Photo by Eric BC Lim on flickr.

Unfortunately, these types of stunts are becoming more common around the world. Canadians, Americans, and Australians have been arrested at Machu Picchu in Peru and Angkor Wat in Cambodia — both considered sacred sites — for taking naked photos of themselves there.

So far the Machu Picchu strippers have been treated lightly, while the Angkor Wat violators were fined, given suspended sentences, deported and banned from Cambodia for four years.

My view: It’s not the nudity as such — which could be perfectly harmless in other places and times — that’s the problem. It’s the disrespect that it shows for other cultures — their history, heritage, and spiritual beliefs – at these particular places and times.

Americans might not appreciate foreign tourists taking nude photos of themselves at the September 11 Memorial. And as a writer for one of the British papers wrote, Londoners might not welcome a visitor stripping down in Westminster Abbey.

I’m glad to say that, to my knowledge, no baby boomers have been involved in these incidents.

But it’s not just youthful high jinks — Kaminsky is 35 and should know better. It’s probably time for him to grow up.

Next: Some practical consequences of disrespecting local customs.