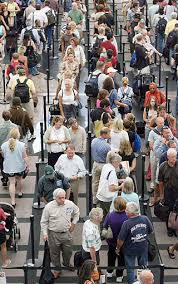 You could avoid this next time you fly.

If you were stuck in a long line at airport security in the New Orleans airport last week at 6 a.m., which looked to be a half hour wait at least (perhaps while your flight was on the verge of boarding), you may have noticed a few people waltzing ahead of you in a special line that had virtually no one else in it.

When they reached the security area, they didn’t have to take off their shoes, their belts, their jackets or remove their laptops or their plastic bags with small bottles of liquids in them from their carry-ons.

And they weren’t airline captains or crew members.

Rather, they were my wife and me and a few others deemed “Known Travelers” who gained entrance through the “TSA Pre-Check (Pre√)” line.

If you aren’t aware of this program, and you fly more than occasionally from a major U.S. airport, you should be.

Done in partnership between the Transportation Security Administration (TSA) and U.S. Customs and Border Patrol Protection (CBP), TSA Pre√ allows passengers who have gone through a pre-screening process to enter a specially marked line if they are flying one of 11 participating airlines out of a current total of 118 U.S. airports.

They can also dispense with the belt, shoe, laptop, etc. removal when they pass through security.

The pre-screening process begins after submitting an application, at one of more than 250 centers nationwide. The application costs $85 and leads to a background check that makes sure you’re law-abiding and otherwise considered not a risk when flying. You also have to provide valid government ID and your fingerprints.

Once approved, you receive a Known Traveler Number, which you need to provide the participating airlines (Air Canada, Alaska, American, Delta, Hawaiian, JetBlue, Southwest, Sun Country, United, US Airways and Virgin America) when you make your flight reservations.

I got my Known Traveler Number through a separate program called Global Entry, run by the CBP, which also allows me to bypass the long lines at Immigration at a number of major international airports when flying back to the U.S. from abroad. All I do is go to a kiosk where I scan my passport, offer up my fingerprints and answer a few questions, and I can dispense with the printed customs form and, more importantly, the sometimes interminable wait to have my passport checked by an immigration officer.

Global Entry costs $100 to apply for, well worth the extra $15 for frequent international travelers. Besides filling out an application and undergoing a background check, you need to appear for a personal interview at a designated CBP Enrollment Center. (I had mine at JFK Airport in New York City.) Once approved, you also get a Known Traveler Number that makes you eligible for TSA Pre√.

Some caveats: The TSA reserves the right to spot-check you at the airport on occasion even if you have a Known Traveler Number, and the special lines are not always in operation, depending on time of day, traffic flow, and other factors. And you need to make sure your flight reservation includes your number; check your boarding pass to make sure it reads “TSA Prechk” or you won’t be allowed to enter the line. (There are a number of reasons how it can get omitted.)

The best thing to do is read more about the TSA Pre√ program at the TSA’s website or the CBP’s Global Entry program at its website.

There are lots of details I can’t cover in this post, but I can tell you that having used these programs during the last year or so, they’ve saved me an awfully lot of time and aggravation — and possibly a missed flight or two, including our early-morning flight out of New Orleans.