One of the covered bridges in Putnam County. Photo from coveredbridgecountry.com.

Just about every writer has tried to mine his or her high school reunion story as some sort of transformative journey into the past that sheds some kind of brilliant new light on the present or future.

So much so that some magazine editors have proclaimed, “Please, no more high school reunion stories.” But that’s the beauty of a blog — I can write what I want, and you can choose whether or not to read it.

Having just attended my, ahem, longtime reunion with 46 other high school classmates (of a class of around 114, 27 are deceased, and 40 didn’t show, so the majority of those still alive did come), I’m naturally inclined to do the same, mulling over headlines like “You Can Go Home Again” or “You Can’t Go Home Again,” depending, I guess, on which cliche I want to pursue.

But I’ll try to avoid both and focus on the travel aspects, which, after all, is what this blog is about.

In my case, my reunion brought me back for the first time in 30 years to the small central Indiana town where I grew up, Greencastle, best known as the home of DePauw University, where both of my parents once taught before they moved away after my senior year at Greencastle High School.

So unlike those classmates who stayed in Greencastle themselves or whose parents remained, my time spent in Greencastle has been minimal as an adult, confined to two class reunions — and they have both left me fairly in awe of the changes that have occurred since I was young.

They can be summed up pretty quickly as: lots more houses both in and out of town, lots more fast-food joints, lots more shopping opportunities away from downtown, a big expansion at my old high school (especially of athletic facilities — go Tiger Cubs!), and a Starbucks on the old Courthouse Square.

I’m not sure why the Starbucks surprised me so much, and I suppose I could use it as a metaphor for something, but it did strike me as something that virtually shouted, “Somebody in corporate America has noticed downtown Greencastle, and found it worthy of overpriced caffeinated drinks!” 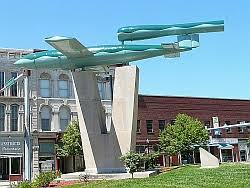 Meanwhile, all the old businesses on the square were gone — the drugstores, the five and dimes, the clothing stores, the little movie theaters — all replaced by, well, things I didn’t recognize, though I was glad to see some new restaurants there.

Greencastle does have a few (mostly minor) claims to fame deserving of mention. John Dillinger once robbed a bank on the Courthouse Square, said to be his biggest haul ever. One biography of comedian Bob Hope said he got his start in Greencastle, but didn’t get into any specifics, so I’ve never been able to confirm it.

When IBM closed its plant here in 1986 and threw a thousand people out of work — about 40 percent of all the local jobs at the time — the New York Times and the Associated Press did long features on it, but the town’s economy has rebounded nicely, attracting new industry both foreign and domestic.

Both ex-Vice President Dan Quayle and civil rights leader Vernon Jordan attended DePauw, which has spiffed up its campus considerably since my last visit, including its architectural centerpiece, East College, a building that dates from 1839. DePauw also added a Nature Park ten years ago that includes more than 500 acres of forest and hiking trails that follow the rim of an abandoned limestone quarry, complete with turkey vultures circling ominously overhead.

Greencastle’s Courthouse Square, just a stone’s throw from the DePauw campus — everything in Greencastle is closer together than I remembered — displays one of only two World War II German buzz bombs in the U.S., the other being in the Smithsonian Institution in Washington, D.C. The story of how it got the buzz bomb is fairly long and complex, so I won’t go into it here, but apparently its display is somewhat controversial and the local Convention and Visitors Bureau doesn’t much promote it.

An 1898 covered bridge in Putnam County. Photo from coveredbridgecountry.com

I commend the Putnam County visitors bureau for producing a map that includes both counties to make it seem as though it’s all one big covered bridge bonanza, even if you have to cross the county border to realize the full extent of it.

About 10 miles south of Greencastle, the town of Cloverdale can claim nearby Cataract Falls, said to be the largest cascades in Indiana. And the county also includes the town with my all-time favorite name, Roachdale, worth a visit just to take a picture next to the “Roachdale” sign.

All too often, we never met, but it does bring back memories of the eternal hopes of youth. And that’s something the less youthful I hope never changes.