The Grand Hotel on Mackinac Island. Photo by Catharine Norton

On the fourth day of my recent “Magical Lake Michigan:”cruise aboard the Grande Mariner with Blount Small Ship Adventures, we reached the top of Lake Michigan in early evening.

Dinner, normally served at 6:30 p.m., was delayed a bit while we sailed under the five-mile long Mackinac Bridge, which spans the Straits of Mackinac and connects the Upper and Lower peninsulas of Michigan.

The bridge was opened to traffic in 1957 and is considered an engineering marvel, costing $100 million to build. It’s the fifth largest suspension bridge in the world and the largest in the Western Hemisphere. Four million vehicles cross the bridge annually.

We were heading for Mackinac Island, just beyond the bridge, following our earlier stop at Beaver Island. Docking there in early evening, we would have much of the next day to explore the island.

The contrast between remote, rural, sparsely populated Beaver Island and Mackinac Island could not have been more striking. 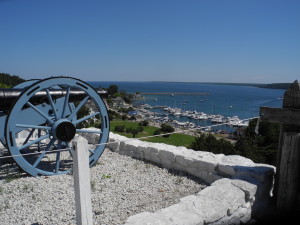 The cannon at Fort Mackinac overlooks the harbor on Mackinac Island. Photo by Catharine Norton

Mackinac Island (pronounced “Mackinaw”) is the ultimate resort area, drawing a million visitors per year, and boasts expansive flower gardens, woodsy hiking and biking trails, and a number of charming hotels, many of them quartered in gorgeous Victorian mansions, each more elaborate than the last.

The grandest of all is appropriately known as the Grand Hotel, which sits perched on a bluff overlooking the lake. (Mackinac Island is actually located in Lake Huron just a short distance from Lake Michigan; the Straits of Mackinac and the Mackinac Bridge mark the boundary between the two lakes.)

The Grand Hotel is famously known for its high tea, served afternoons in its elegant parlor, and for its dramatic 200-meter-long front porch, the longest in the world, lined with rocking chairs where guests can relax overlooking the gardens and pool.

The Grand Hotel also stakes a claim as the world’s largest summer hotel, with nearly 400 rooms – no two alike. As with much of Mackinac Island, which has only 600 permanent residents, the hotel shuts down in winter, and is open May through October only.

Executive Vice President and Managing Director Ken Hayward was nice enough to show my wife, Catharine, and me around the hotel. We looked into several suites named for First Ladies: Lady Bird Johnson, Betty Ford and Rosalyn Carter. The decor and views were equally spectacular.

We had lunch at the hotel’s bountiful buffet, which included oysters on the half shell, cold boiled shrimp, an array of delicious salad makings, five entrees including chicken, pork and beef dishes, and a number of tasty sweets for dessert. Afterwards, we found seats on the porch rocking chairs and digested until we were ready to walk some more.

No Cars Allowed on the Island

The only ways to get to Mackinac Island are by boat or by plane. While ferries make frequent trips to and from the mainland, no cars are permitted on the island. The Mackinac Bridge spans the straits between the Upper Peninsula and Michigan’s lower half. Photo by Dennis Cox/WorldViews

Besides bicycles, which are exceedingly popular, the only form of non-walking transportation is by horse carriage, pulled by teams of hardy Belgian draft horses. There are some 500 horses in all on the island, and besides taking tourists around, they make deliveries of goods to hotels and restaurants as well.

With the horse carriages and Victorian architecture, visiting Mackinac is like taking a trip back to the 19th century — or even to the 18th century at historic Fort Mackinac, which commands a high hill on the island and remained a British stronghold for several years after the American Revolution brought independence from England.

The fort is part of Mackinac Island State Park, which was once the second U.S. national park after Yellowstone, before reverting to state park status back in the late 19th century.

Along with touring the Fort’s many buildings, you can enjoy sweeping views of the harbor and lake from various viewpoints there, including a café where you can stop for a casual meal or drink with million-dollar vistas. Horse-drawn carriage is the main mode of transport on Mackinac. Photo by Catharine Norton.

I would also recommend a hike through the woods to Arch Rock, a huge natural arched rock formation that frames the lake like a circle. You can also reach it by horse carriage tour or view it from below by the bicycle trail that runs around the island’s perimeter.

The perimeter trail is flat and can be completed by bike in about two hours. You can rent a couple of bikes on the island for about $30 for that length of time. Bike rental places are everywhere near the waterfront.

The Grande Mariner also has a few bikes on board for passenger use, but you’ll likely find better bikes at the rental shops. Or so we were told during this cruise.

At 5:30 p.m., after nearly a full day there, we sailed out of Mackinac, headed for Wisconsin on the western side of Lake Michigan.

Next up: Sturgeon Bay and Milwaukee, Wisconsin