According to legend, Chinese New Year traditions stem from thousands of years ago when a monster threatened a village on the eve of the first day of the lunar calendar (which can range anywhere from late January to late February).

The monster fled only after the villagers learned that he feared loud noises, fire, and the color red. So now fireworks, the beating of drums, and red dragons and lanterns are an essential part of every celebration.

New Year Do’s and Don’ts Live on in Tradition

According to Chinese tradition, how you comport yourself during the New Year can determine your fate — for good fortune or bad — over the entire coming year. 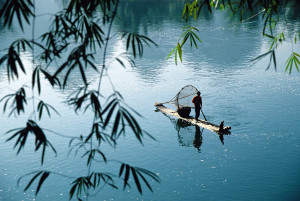 Tradition dictates a number of “Do’s” and “Don’ts” for the New Year, so you may wish to print this out and hang it on your refrigerator, especially since some of them revolve around food.

And if you’re traveling to China or visiting a place with a large Chinese population, you’ll definitely want to keep these in mind.

Here, then, with thanks to China Travel Guide, is my take on some things to either embrace or avoid during Chinese New Year:

Foods that are said to yield good fortune are all about symbolism — auspicious connotations for the year ahead.

The symbolism is based on similar sounds (homophones) in Mandarin and Cantonese. “In Cantonese, the word for prawn, ‘har’ sounds like ha ha, which means laughter and happiness, so the Chinese believe that eating prawns signify that you will be happy every day,” said Ricky Thein, executive chef at Lai Po Heen restaurant at the Mandarin Oriental Kuala Lumpur hotel, in an interview with the Star newspaper in Malaysia.

Fish, in turn, stand for abundance. Fish (鱼) is called “yu” in Mandarin, and is pronounced the same as the Chinese word for abundance or surplus (余). Similarly, abalone stand for good fortune, and oysters for good news.

The pomelo fruit, which Thein incorporates into a fish dish, is thought to signify an abundance of wealth, since the word for pomelo in Cantonese is similar to those for prosperity and status. Since the theme of wealth figures prominently in Chinese New Year meals, Thein invented a dish that stuffs chicken wings with mushroom and crab meat.

“The stuffing inside the chicken looks like money bags, which is a good meaning, because who doesn’t want to get more money this year?” Thein explained.

In Malaysia, where some customs are different, Chinese often start their New Year’s meals with a dish called “yu sheng” — a raw salad topped with fish, usually salmon.

A server in a restaurant will pour the seasoning and sauces and add the salmon, while saying auspicious phrases like ‘nian nian you yu’ and ‘bu bu gau sheng.’ After that, everyone tosses the yu sheng as though you would a mixed salad. The higher you toss, the better the year ahead.

While eating seafood is mandatory among Chinese in Malaysia, and prawns are prized in China as well, mainland Chinese add egg rolls to the roster of must dishes,  because they resemble bars of gold.

Noodles are another important New Year’s dish there, because they symbolize long life. And the all-important dumplings (jiaozi), usually eaten on New Year’s Eve, are shaped like Yuanbao (a kind of money used in ancient times) and are believed to bring wealth in the coming year.

According to China Travel Guide, you should avoid eating porridge and meat for breakfast on New Year’s  morning because in the past, “poor people could only afford rice porridge, so porridge reflects a down and out life.” It’s also disrespectful to eat meat at that time, because Buddha was a vegetarian. And by the way, whenever you eat your noodles, don’t cut them, because that could cut your life short, too.

Do: Eat leftovers for breakfast on New Year’s morning.

Specifically, the leftovers from New Year’s Eve reunion dinner (when family and friends gather from near and far). This shows that people “always have more than they need,” says China Travel Guide.

If the rice jar — which indicates your standard of living — becomes empty, you may face starvation during the year.

Do: Fill up your rice jar.

Filling up the rice jar before New Year’s Eve is a good way to assure healthy finances in the New Year, and, presumably, avoid starvation. Do not break this.

If you break one of these items, it may result in loss of money or a split in the family.

Do: Collect the fragments or say “Sui Sui Ping An.”

If you accidentally drop a plate, vase, etc., China Travel Guide advises that you collect the fragments, wrap them in red paper or cloth, and scatter them on the fifth day of the New Year. Alternatively, you can say, “Sui Sui Ping An,” which means “safe and sound every year.” Since the Chinese character for “Year” (岁 Sui) is pronounced the same as “Broken” (碎 Sui),  the homophones will ward away bad luck.

Unless you’re severely ill, don’t take any medicine or see a doctor until the Lantern Festival (15 days after New Year’s), or risk being sick all year round. Don’t take your medicine if you can possibly avoid it.

Do: Eat black moss and nian gao (a sticky cake).

Sea moss and Nian gao stand for prosperity. So when the Chinese say “nian nian you yu” (年年有余), it means  you’re wishing for abundance every year.

Avoid uttering words such as “death,” “killing,” “ghost,” “sickness,” “pain,” “losing,” and “poverty” for the entire Spring Festival, or suffer the consequences, warns China Travel Guide.
Do: Use euphemisms if necessary.
If, for example, you need to say you’re in pain (and you can’t take your medicine), you might try, “I feel good enough to live for at least two more days.”

Don’t: Wash your clothes, sweep the floors, take out the trash, or pour water outside.

Since the first two days of the Chinese New Year are considered the Water God’s birthday, you will offend the god by washing your clothes at that time, according to China Travel Guide.  If you do engage in these behaviors, you’ll be sweeping, dumping, or pouring out your good fortune as well (flowing water indicates movement of money). If you must sweep the house on New Year’s Day, sweep from the outside of the house inward, which symbolizes collecting money.

Do: Clean your house before the New Year.

Cleaning up before the New Year is considered auspicious for the year ahead.

Since a crying child forebodes disease and misfortune — which may bring bad luck to the whole family — refrain from punishing your kids, advises China Travel Guide, “even if they make mistakes or are naughty.” Do: Give your kids money.It’s traditional for parents and any older or married members of a family to give red envelopes (hong bao) filled with money to children and young unmarried family members. The packets are given as a sign of good luck and prosperity.

Don’t: Give your kids money or anything else that features the number four.

The number four is the same as death (sei) in Cantonese.

Don’t: Get a haircut, especially with scissors.

If you get your hair cut during the first lunar month, China Travel Guide advises, it portends the death of your mother’s brother (i.e., your uncle). Using scissors only compounds the problem, since it signals you’ll be quarreling with family members or friends, perhaps over funeral arrangements.

Do: Make sure your niece or nephew doesn’t get a haircut. It’s a good idea to hit the ATM before Chinese New Year, so you won’t have to borrow money.

Don’t: Be a borrower or lender.

Don’t lend or borrow anything, especially money, on the first day of the New Year. Lending money is a bad omen, signifying economic loss, so it’s also taboo to ask to borrow any. Asking for return of debts owed is a big no-no as well.

Do: Hit the ATM before the New Year.

Don’t: Dress in rags or in black and white.

Avoid ragged or dirty dressing, says China Travel Guide, which symbolizes poverty and misfortune. Dressing in black and white, meanwhile, is usually reserved for woefully dour occasions like funerals and mourning ceremonies, which makes it inappropriate at festival time. Perhaps needless to say, don’t even think about wearing black and white rags.

These indicate a brand new start.

Don’t: Wake anyone up or nap.

If you wake up anyone on the first day of Spring Festival, cautions China Travel Guide, the one awakened “would be urged to do their work all the year around, exhausted and nervous.” And if you take an afternoon nap on New Year’s Day, you risk becoming lazy all year round.

Those are two ways of saying “Happy New Year!”

And if the appropriate dishes are served, the house is clean, the debts are paid off, the number four is avoided, you dress properly, and you don’t get a haircut or take a nap, the year of the Fire Monkey is bound to be healthy and prosperous!