By Travel Obsessed: Confessions of a Bosch Junkie The Garden of Earthly Delights, a famous Bosch triptych in Madrid’s Prado Museum

Way back in 1971, shortly after graduating from college, I developed an obsession for the paintings of the 15th-century Flemish master Hieronymus Bosch, whose phantasmagorical — sometimes grotesque — artworks appealed to my psychedelic sensibilities of that era.

I spent days in libraries hand-copying notes from dusty tomes about the artist, sought out all of his works in American museums, and eventually embarked on a three-month pilgrimage to Europe determined to set eyes on every Bosch painting on the Continent.

On my target list were 31 museums and churches containing 58 works of art, scattered across a dozen countries and 26 cities and towns from Copenhagen to Vienna to Lisbon.

My resources were limited: a Eurailpass, a copy of Europe on $5 a Day when it was still called that, and a budget to match. Often I walked miles to a museum and back, sometimes in rain or snow, to save the price of a bus ticket. (Taxis were out of the question.)

To avoid hotel bills, I often slept (or tried to sleep) on trains; for six nights running, I shuttled back and forth between Amsterdam (the Rijksmuseum) and Copenhagen (Statens Museum for Kunst) — and to this day the 2 a.m. conductor cry of “Achtung!” each time we reached the German border remains emblazoned in my brain.

No big deal: I was young and mostly impervious to discomforts. But even more, I burned with the zeal of a pilgrim. Bosch was my Mecca/Jerusalem/Vatican/Varanasi, the list of museums my holy scripture, the museums themselves my shrines.

And with each shrine visited, each painting observed and cataloged in my notepads, came the revered checkmark indicating a completed mission, as though I had somehow progressed along the spiritual ladder.

In the end, my quest fell short by the price of transportation to Berlin (Staatliche Museum); then-East Germany didn’t accept Eurailpass and I was down to my last $5. But I returned to the U.S. with a sense of fulfillment, of obsession well met — even if no one else could fathom why. Bosch’s Ship of Fools — did I belong on it?

Frankly, I can’t quite explain it myself. My interest in Bosch was strictly amateur; I had no advanced training in art history, no Bosch-related writing assignments.

Ordinarily, my travel pursuits are fairly typical: museums, to be sure, but also finding good restaurants, admiring the scenery, hiking, lying on beaches, sitting in cafes watching the world go by.

Why, when I was in Copenhagen, did I skip a day at Tivoli Gardens to sit in a stuffy storeroom of the Danish national art gallery copying Flemish inscriptions on etchings I could never hope to read? (“Al dat op dew blauwen trugelfack, gheerne leeft Gaet meeft al cruepele, op Bendefyden….”)

The key to this vexing question, I think, lies in the word “obsession” — a word not to be taken lightly.

The dictionary definition speaks of a “persistent and disturbing intrusion of” or “anxious and inescapable preoccupation with” an idea or feeling — “especially if known to be unreasonable.”

It even has a supernatural connotation: “the act of an evil spirit in possessing or ruling a person.”

Pretty strong stuff, but, I suppose, close to the mark with concern to my Bosch trip.

I don’t know about the role of evil spirits, but my preoccupation with seeking out every work by one painter — however fine an artist — was certainly persistent, sometimes anxious, and, in retrospect, not all that reasonable.

So do I regret my pilgrimage of 45 years ago, reflect on it as three months of misspent youth? 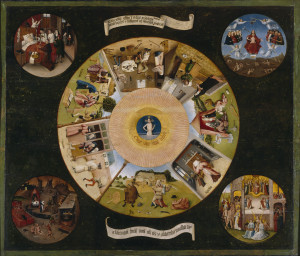 Not at all — in fact, it remains one of the most memorable trips I’ve ever taken.

Picture a scruffy-looking young American, his clothes rumpled from sleeping on trains, his feet aching from countless miles of walking, his stomach growling for lack of funds, pleading with a guard at Madrid’s Prado Museum for a chance to view one of Bosch’s masterworks, the Seven Deadly Sins.

Alas, the guard informs him, the painting is being restored, the restoration room closed to the public.

Yet…the guard can sense the desperation in the young man’s eyes, and he takes pity. Foregoing his siesta, he sneaks the American into the restoration room — then insists he stay to view the masterwork for as long as he wishes, allowing him a private audience with it as if he were the second coming of Bernard Berenson.

It’s a moment of supreme satisfaction, experienced by someone with no credentials whatsoever — except for a seemingly unreasonable obsession.

Next up: Further adventures  and misadventures on my Bosch quest, lessons learned, and the sometimes surprising benefits of travel obsessions.

Travel Tip of the Day: If you’re obsessed with a particular activity or famous person — whether it’s quilting, birding, cooking, running, ballroom dancing, Elvis impersonating and many more — consider taking a theme cruise in the company of other like-minded obsessives. A good place to start is the website Theme Cruise Finder, which lists hundreds of upcoming cruises in numerous categories.

2 Responses to By Travel Obsessed: Confessions of a Bosch Junkie