Catharine and I had spent a few days in Shanghai and now had to get to Yichang, which, to be frank, I had never heard of before booking the cruise. To be safe, we built in an extra day there before the cruise, and hoped we’d find things to keep us occupied.

Getting to Yichang proved easy because the Chinese train system is excellent. We simply caught the Shanghai subway to the city’s Hongqiao railway station — a sparkling new, huge edifice from which a number of bullet trains speed passengers to other parts of the country — waited by the gate where our train number was clearly marked, boarded the train when called, and settled back in comfort in seats that rivaled most European trains. Like Swiss trains, it left on the dot at 8:35 a.m.. 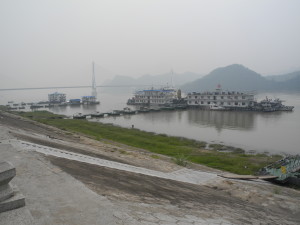 Riverboats docked along the Yangtze in Yichang, China. Photo by Catharine Norton

Ours wasn’t a bullet train — the ride to Yichang took much of the day — but we got good views of the countryside as well as the many look-alike, and far less scenic, high-rise apartment buildings that signaled upcoming cities as we approached each stop. Chinese are flocking from the countryside to the cities, and they have to live somewhere, even though their neighborhoods are now nondescript floors in buildings that seem to have sprouted out of nowhere, sometimes miles outside town.

We arrived in Yichang in late afternoon, right on time, to be greeted by a young man who functioned as an unofficial taxi dispatcher. Seeing no alternatives, we employed his services, and he hooked us up via cellphone with a semi-English-speaking dispatcher, who after several minutes of confused back and forth, seemed to figure out what hotel we had booked. He quoted a price of 60 yuan, about US$10, which seemed OK though we had no idea of the distance.

A taxi — or at least a car with driver — soon showed up, we handed him the name of our hotel in Chinese characters, and, after puzzling over it for a while, nodded and took off.

We sped for a half hour through what turned out to be a huge city of four million people, which, by Chinese standards, is more like a medium-sized burg, and we seriously wondered if the driver had any idea where he was going. Eventually he deposited us in front of the sprawling Yichang Taohualing Hotel, a regal-looking edifice that was once Yichang’s finest lodging, and still looked impressive for a place we got at a nice discount over the Internet.

Our room was perfectly fine and we were just a few blocks from the river, where much of the action in town takes place. So far everything was going remarkably smoothly, and, after a walk along the waterfront, we stopped into a restaurant called Fuchu, which had been recommended to me by a friend. She did warn me, however, that they didn’t have an English-language menu.

We were greeted warmly and handed a sheet of choices in Chinese, which we were obviously expected to fill out, but hadn’t a clue as to how. But they did have a Chinese-language menu near the door depicting the dishes available, and visuals, fortunately, are universal. We saw one dish that looked like soup, another that appeared to be roast duck, and another that at least resembled the radish dish my friend had liked. Then we matched the prices and the Chinese characters from the visual menu to those on the Chinese-language form, checked off what we wanted, and proudly handed the form…to what turned out to be the cashier, who looked thoroughly confused and called over the manager.

Taking pity on us, he found us a table in the crowded restaurant, wrestled with the concept of  “cold beer” (I had foolishly forgotten the word for beer in Chinese: piju) and motioned for us to sit down.

Remarkably, two semi-cold beers soon showed up, along with a delicious duck soup, a plate of roast duck, and a wonderful shredded radish dish. (Yes, it was more duck than we had anticipated, but fortunately we like duck.)

A Mysterious Celebrity and No Guts, Please

The next morning the lobby of our hotel had been transformed: a security gate with X-ray machine been installed, a huge sign had been erected proclaiming in English “Welcome to Yichang,” and any number of police and security types were milling about.

We spent the day mostly walking miles up and down the river, but when we returned to the hotel in late afternoon, nothing had changed except there were now police everywhere, joined by TV cameramen and reporters, and the staff were all dressed to kill. Who was the arriving celebrity?

We waited in the Taohualing’s Peach Blossom lobby bar to find out. Taking seats, we expected the woman behind the bar to come take our orders, but she barely gave us a glance. Finally I went up to order two beers and she broke into a huge smile as though no one had actually ordered a drink for months.

Nursing two lukewarm beers, we waited…and waited…for the VIP to arrive. Now police and TV people were everywhere, and we could see a procession of minivans parading outside. But no celeb emerged.

Since it was now dinnertime, we left somewhat reluctantly and found a hole-in-the-wall noodle shop where the motherly looking owner-cook showed us a choice of two sauces to be poured over the noodles. Since they both looked OK, we pointed to one of each, then took a seat at an outdoor table. Couple poses for wedding pictures along the Yangtze in Yichang, China. Photo by Catharine Norton.

Shortly thereafter, a Chinese woman passerby approached us, said she had overheard our conversation, and asked if we knew we had ordered “guts” as one of the two choices, the other being regular beef. “Americans don’t eat guts, do you?'” Not wanting to speak for all Americans, we still shook our heads, and she promptly informed the owner that we would have two of the beef noodles instead. Then we thanked her and she walked away — one of only several such instances of unsolicited help we encountered in China.

Returning to the hotel, we found the security gate and X-ray machine had been abandoned, the police and TV people were gone, and the staff had moved back to their regular posts.

We never did find out who the mysterious celebrity was, even though I asked a staffer. “I’m sorry,” she replied, “my English is not very good. Are you in need of more towels?”

We decided to let the mystery remain, and focus on finding our ship the next day.

Next Up: Cruising the Yangtze and Searching for the Katarina.