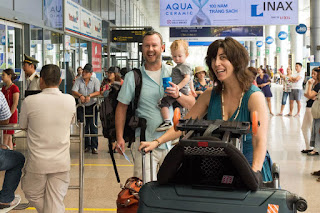 Today I’m delighted to introduce guest poster Myles Stone, a physician and friend of my son, Grael, and daughter-in-law, Nona.

Grael, Nona, and young Conrad P. Norton, who was 16 months old at the time (all pictured above arriving in Viet Nam), recently spent two weeks visiting Myles, his wife Aimee, and their baby daughter, Mimi, during their stay this spring in Hoi An, Viet Nam.

Though their experiences were those of a younger generation — none were alive during the Viet Nam War that so consumed the formative years of most baby boomers — Myles’ observations on their two months in Hoi An offer insightful and amusing glimpses of what life is like there today more than 40 years after the end of the war. (His complete blog can be found here.)

In this installment, one of a multi-part series, Myles describes the  key role that the local neighborhood “fixer” played in their travels.

After meeting Grael, Nona, and Conrad at Da Nang airport,  we met up with our pre-arranged car and driver. But this was next-level car planning. We now had a fixer.

Every good adventure story always has the same key character, the local fixer who knows the lay of the land, and can prevent problems before they happen. And now we had our own fixer in Long, the owner of the nail salon on our street. 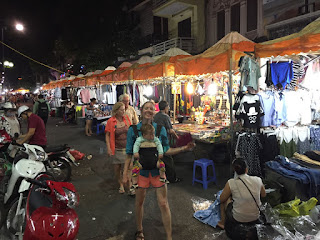 Like most people we have met in this country, Long is genuinely nice. The dozens of times she said hello to us as we walked past her shop were not entirely just to get us to stop in.

So with each trip down the street, our conversations got longer and longer. Between her broken English and our extremely broken Vietnamese, we got to know each other a bit better, and she wanted to help make our trip smoother.

After just a few days in Hoi An, we were going to Long for everything from dining advice to how to find a crib. She came through on everything, including leaving a solid wood crib at our front door when we were out at dinner one night.

So now whenever we need to solve a problem, we go to Long first. And that’s not as crazy as it sounds.

In Viet Nam, particularly rural Viet Nam, everyone does everything, and everyone has a cousin that does the few things they don’t. Most every restaurant in Hoi An doubles as a travel agent, and will also do your laundry for $1 a pound.

Long is no different, she’s resourceful and a problem solver. When we needed a big van at the airport for four adults, two babies, and all the associated gear, we couldn’t just go to the taxi stand. We went to Long.

A few minutes after Nona and Grael’s arrival, we heard a familiar mispronunciation of my name. “Meo! Meo!”

Long was running over to us with two people by her side. One helped load their luggage onto a cart, and the other one introduced herself with flawless English.

She was an off-duty tour guide from the same small village as Long. Long had asked her to come along on the 30 minute drive from Da Nang to Hoi An to tell us the history of the region.

It was a fascinating conversation, and a nice addition to the already luxurious ride home.

And all this for less than I usually pay for a taxi to my office in Da Nang. It’s good to know people.