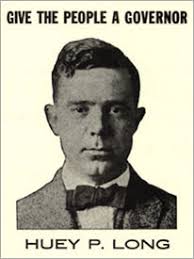 Long hated it so much that he built the New State Capitol building, which is a shorter version of New York’s Empire State Building, but is the tallest capitol building in the country at 450 feet. He also tore down the old governor’s mansion and built a new one that resembled the White House in Washington, using convict labor. After spending $300,000 on it during the Great Depression — a lot of money in that era — Long spent a total of 14 nights there, preferring to stay in hotels.

Nonetheless, Long, a populist, was beloved by much of the citizenry because he championed the “common man” — his campaign song was “Every Man a King.” Long provided hot lunches to poor school students, paved roads, built bridges, and improved the standards at LSU to turn it into a respected university. To pay for it all, he taxed the oil companies that so visibly operate in Louisiana.

And when he was assassinated at the Capitol building — the chief suspect was shot dead by guards and may indeed have been innocent — 80,000 people paid respects at his bier. A statue of him stands in front of the Capitol building, among the 24 acres of lakes, trees and gardens that he had built there.

Much of this information comes thanks to our guide on the bus tour of the city offered by American Cruise Lines, whose old-time paddlewheeler-style boat, the Queen of the Mississippi, was taking us on a week-long voyage down the Mississippi River from Memphis to New Orleans. We were docked in Baton Rouge for an evening, an overnight, and one full day afterwards, so we had plenty of time to roam around the capital and soak in all things Huey.

Baton Rouge, by the way, has hosted a string of eccentric governors, including singer Jimmie Davis, who wrote dozens of songs and lived to be over 100. Among those he is widely credited with is “You Are My Sunshine,” said be the second most recognized song after “Happy Birthday.” Davis once rode a horse into the Capitol rotunda to make the point that he needed a limousine.  A later governor, Edwin Edwards, went to prison on extortion charges, then married a woman 50 years younger than himself after he got out. At age 86, he remains a popular figure.

I highly recommend the Capitol Park Museum, which has colorful exhibits depicting various aspects of life in the very colorful state of Louisiana, ranging from Mardi Gras to Cajun culture (stemming from French-speaking deportees from Acadia, in Canada), from Mississippi showboats to New Orleans jazz, from creole food to, of course, Huey Long, whose fiery speeches reverberate on endless reels of video that are, frankly, mesmerizing. The man could hold a crowd, that’s for sure. 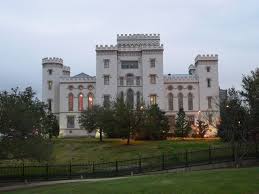 I also recommend an area near the Capitol called Spanish Town, which dates from 1805 or so. It’s lined with shade trees, Art Deco houses, and a number of pink flamingo lawn ornaments, which form the theme of Spanish Town’s Mardi Gras parade and show up annually in the lakes at LSU.

“Baton Rouge,” of course, is French, the predominate cultural influence in southern Louisiana, meaning “red stick.” One story goes that animal blood was smeared on a stick to delineate hunting grounds used by local Native Americans, but no one knows for sure.

What we do know is that “Baton Rouge” sounds much classier than “Red Stick.” And, to my knowledge, no governor has tried to anglicize it. At least not yet.

Next up: Oak Alley and New Orleans

2 Responses to Touring the “Red Stick” via American Cruise Lines