A Restaurant That Doesn’t Let You Forget It’s There 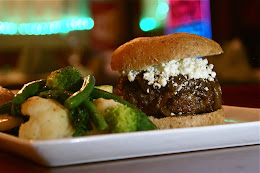 Aroma Thyme’s lamb burger with vegetables on the side. Photo from Aroma Thyme Bistro.

My first encounter with Aroma Thyme Bistro, located in the town of Ellenville in New York’s Hudson Valley, was at a fundraiser for our local public radio station. Called Foodstock because of its proximity to the original Woodstock concert site, the event brought together restaurants from around the region to give out free samples (once you paid your way in) and perhaps lure you to come dine with them in the future.

First, they didn’t just hand out any old samples. They handed out samples of one of the two most expensive items on their menu, rare sesame crusted albacore tuna with Sriracha and peanut glaze. It was so good I came around twice, hoping they wouldn’t recognize me from the first time.

Second, they gave out free gift certificates for $25 off a meal for two people. Another couple my wife and I are friendly with also loved the tuna and got one of the gift certificates, so a few weeks later we all piled into their car and drove to Ellenville, a good hour away or more from where we live.

We had a great meal and signed up for their e-newsletter and royalty rewards program, in which you can accumulate points for more discounts. 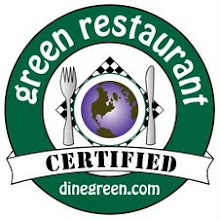 Since that time, I’ve received at least one and sometimes two or three emails a week from Aroma Thyme Bistro. There’s always a royalty rewards “joke of the week,” often corny but amusing. And there are announcements of special events and discounts for, say, dining there on Super Bowl Sunday, or something written by chef-owner Marcus Giuliano on food safety, which is one of his pet topics. (Aroma Thyme is a certified “green” restaurant, serving organic ingredients and eschewing the unhealthy practices found in  many restaurants; Zagat has labeled their cuisine “stealth health,” because it tastes so good you don’t realize it’s good for you.)

A few days ago we received a colorful card in the mail wishing my wife, Catharine, a happy February birthday, including a $15 off coupon that has to be used this month. When I showed it to Catharine she said, “Let’s go!” Now, we live far enough away from Ellenville that a drive there in winter for dinner over possibly snowy roads at night probably isn’t worth the effort, even for that sesame-encrusted tuna. But from time to time we pass by Ellenville on our way somewhere else, and if that should happen, we’ll have our certificate ready and go in to enjoy a meal.

So a restaurant that’s at least an hour’s drive away from us has managed to stay on our radar for several years by some very clever and fairly aggressive marketing techniques.

They compile lists of email and snail mail addresses of satisfied customers, keep them entertained with jokes and informed both about the restaurant and matters connected to healthy eating (Giuliano blogs frequently on that topic on the restaurant’s Website), offer them special discounts through their rewards program, remember their birthdays, and often include a call to action (in the case of the birthday card, “Hurry!” — with February 28, 2014, circled as the last day the coupon can be used ).

This is the kind of marketing that builds customer loyalty, keeps people coming back, and — not incidentally — helps to hurry those return visits along.

And did I mention  that baby boomers are the generation most driving the restaurant business these days? A report by the National Restaurant Association showed that America’s boomers — 76 million strong — spent $172 billion in U.S. restaurants in 2012, spending more per capita than did younger diners (the youngest boomers are turning 50 this year, the oldest 68).

Even though it takes some time and expense for a restaurant to market itself to this degree, Aroma Thyme Bistro is proving that it works, whatever your age.