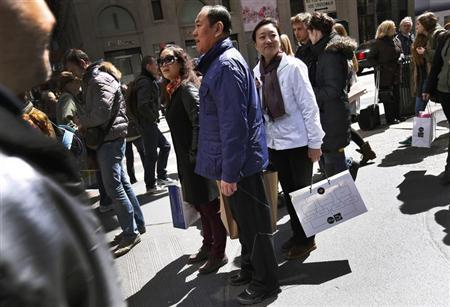 The rise in Chinese visitors reflects a loosening of U.S. visa requirements and tour-group restrictions over the past six years, and the tourism tide is expected to just keep growing, at a pace of more than 250 percent by 2017.

It also reflects the rapid rise of the Chinese middle class — now about 20 percent of the population there, and growing — who flock to the U.S. (as well as France and other western European countries) to sightsee, experience a new culture — and, most of all, to shop. Luxury gifts for relatives and friends are high on their lists.

Brand-name western goods are typically less expensive in the U.S. than in China — even if, ironically, they’re made in China. So Chinese have become big customers at U.S. clothing outlet malls in California, New York and elsewhere, as well as at boutique shopping areas like Rodeo Drive in L.A. and midtown Manhattan.

Savvy travel marketers in the U.S. have realized the potential, even if many others haven’t caught on to this trend yet.

Outlet malls in California and hotels in New York are employing Mandarin speakers; hotel chains such as Marriott and Hilton are sending sales reps to China; and some cities and states have opened or are considering opening tourism offices in China.

Michigan is among the states away from the coasts that are awakening to the tourist potential, with hopes of luring Chinese tourists with its “Pure Michigan” advertising campaign, which state tourism officials will accent during an upcoming Asian trade mission.  Thousands of Chinese students are now attending the University of Michigan and Michigan State University, adding to the potential — and challenge — of enticing their families to the state for visits.

California — which draws almost half the Chinese tourists in the country — is investing more than $1.5 million annually in marketing to China, including opening tourism offices there.

And, as mentioned above, Starwood hotels (Sheraton, Westin, and W) and others are now featuring Chinese foods in their buffets (as well as translated menus) and other amenities to keep this emerging clientele happy.

New York’s Marriott Marquis even reportedly changed room number 4444 (considered the height of bad luck in China) to the “Imperial Suite.”  (The hotel’s lobby is on the 8th floor, considered good luck.)

While China’s wrenching post World War II experience was very different from that of the West — the “baby boom” that hit the U.S., Great Britain and Australia didn’t have an equivalent in China at that time — there are still nearly 200 million Chinese of that generation (ages 49 to 67), and many now have the desire to see the world and the resources to do it.

Many of them are now planning and booking their trips via the Internet, too, often relying on social media — more and more accessed through mobile devices — to gain information about where to go, shop, and stay abroad.

Surveys have shown that about two-thirds of Chinese travelers learned about California from websites and social media. Video posts can be crucial to reaching Chinese visitors as well.

There are cultural gaps to be crossed. So it wouldn’t be a bad idea for all U.S. hotels, clothing shops, theme parks, tour operators, tourism offices and other travel-related businesses interested in this huge new emerging market to start figuring out how to appeal to it — now.