The Five U.S. Cities Foreign Visitors Want to See Most Golden Gate Bridge tower, San Francisco — a must-see in the City by the Bay. Photo by Ian Klein/Dreamstime Stock Photos

OK, I’ll admit it, there’s nothing scientific about this list. I haven’t googled “The Five U.S. Cities Foreign Visitors Want to See Most,” because this post is based strictly on my own anecdotal experience.

And my experience in talking with foreign visitors from Switzerland to Singapore, Panama to Palau — and points in between and beyond — is that a remarkable number have the same wish list:

Having lived in three of these cities and visited the other two, I understand the appeal. Not only are they great cities, but they dominate American movies and TV settings, and, in several cases, serve as the beacons of American glitz and glamour.

Sure, I’ve met plenty of foreign visitors who add other destinations to their wish list: the Grand Canyon for, well, grandeur; Yellowstone, Yosemite and Death Valley (yes, Death Valley) for more national park grandeur;  Washington, DC, for its museums and Capitol; Chicago and New Orleans for music and, in the case of Chicago, some lingering belief that one will encounter glamorous gangsters; California’s Napa Valley for wine; and various miscellaneous spots.

But, like African safari-goers in search of the Big Five* of wildlife, visitors to the U.S. — baby boomers on down — seem to zero in on the Big Five cities of  San Francisco, Los Angeles, Las Vegas, Miami and New York.

So here’s a primer on what they may find:

* San Francisco — The City by the Bay was my home for more than 20 years, and remains my favorite. Anything you choose to do here will be amply rewarded, except for visiting Fisherman’s Wharf. But you’ll visit Fisherman’s Wharf anyway, because that’s what everyone does, so it’s OK. You’ll also visit adjacent Pier 39, a glorified shopping mall that at least has some decent views, but that’s OK if you go there to take the ferry to Alcatraz island, the ex-maximum security prison where some of those glamorous gangsters you hope to meet in Chicago went to die. (Yes, I’m talking about you, Al Capone.)

Of course, you’ll want to ride a cable car or two, walk at least partway across the Golden Gate Bridge, spend some time in Golden Gate Park, visit the Haight-Ashbury district where you’ll still encounter a few burned-out remnants from the glory days of the late 1960s, dine in the Latino-flavored Mission District, wander around Chinatown and North Beach, and stroll the Embarcadero from Pier 39 to the Ferry Terminal, perhaps taking in a baseball game at the wonderful downtown ballpark nearby.

Recommended route to next destination: Highway 1, which leads down one of the world’s most spectacular coastlines, with potential stops at the Monterey Peninsula, Big Sur and Hearst Castle.

* Los Angeles — While I haven’t lived there, I’ve spent many weeks visiting and working in the City of Angels. If you’re seeking celebrity sightings, forget the movie star home maps, which all appear to be decades out of date, and head for otherwise nondescript diners where actors like to eat because they probably won’t be recognized (they’ll be the ones wearing sunglasses and no makeup). I’ve spotted any number of  actors munching burgers or sprouts, depending on whether they’re trying to gain or lose weight for a role, and at the very least you’ll end up with an all-American meal.

Don’t miss Venice Beach for its sheer freakiness, the Getty Center for its art, and the (Gene) Autry National Center in Griffith Park, because that’s where you’ll find the Lone Ranger’s mask and Wyatt Earp’s pistol.

Recommended sidetrip: Death Valley, because it’s really hot and has such a great name.

Recommended route to next destination: drive or fly. 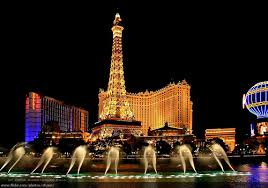 This is actually Las Vegas, not Paris.

* Las Vegas — Called Sin City, Las Vegas — situated in the southern Nevada desert — seems to be on just about every foreign visitor’s wish list, catering to Cirque du Soleil fans, cocktail lovers, food aficionados and, of course, plucky gamblers, often all under the same roof. Depending on how hot it is outside, you’ll want to take a stroll down the Strip to see all the hotels disguised as foreign cities, perhaps even your own, before heading inside in air conditioned comfort to be dined and entertained.

Since you won’t be able to resist anyway, it would be a sin not to play at least one hand of poker or give at least a single downward heave of the arm of the slot machine. If you just can’t wait until you get there, http://www.gamingclub.co.uk will let you experience Vegas’ thrills from the humdrum of your armchair most anywhere in the world.

* Miami — Miami is another of my former homes; in fact, I lived there before South Beach became South Beach — yes, back then I was a youngster among oldsters, since Miami Beach attracted mainly retirees back in the early 1970s. Miami is now the  bright, subtropical jewel in Florida’s gator-infested crown. (I have no idea what that means, but I like the sound of it.)

After visiting South Beach and admiring the Art Deco architecture of its hotels and the audacity of its beachwear, head over to Key Biscayne for a dose of much needed serenity and a beach experience lacking the fake tan and hair extensions that South Beach is (in)famous for.

Recommended sidetrips: the Everglades for its gators and airboats; Orlando for its theme parks, because you’ll do it anyway.

* New York. The Big Apple, another of my former residences, is hot these days: crime is low, the skyscrapers and Broadway ticket prices are high, the crowds are thick, the population is thin, weight-wise (despite some of the world’s best pizza), the Lower east Side is the new Greenwich Village, Brooklyn is the new Lower East Side, and someplace I haven’t heard of yet is the new Brooklyn. Maybe even the Bronx, where I once spent four years living on small City Island, which more resembles a New England fishing village — highly recommended for fried seafood delights!

The best newish thing about New York these days, IMO, is the fact that you can walk for miles along both the Hudson and East rivers with wonderful water views; the High Line, near the Hudson, provides elevated views of the area along a converted railway track, and Circle Line Cruises provide a perspective from the water as they circle Manhattan. And, of course, there are world-class museums, Central Park, Times Square, the Statue of Liberty and restaurants galore, but you knew all that, so I’ll stop.

I’d love to hear from readers abroad who have other U.S. destinations on their wish lists. Readers?

* Big Five of African wildlife: Lion, leopard, rhino, elephant, buffalo. (If I were hippo or giraffe, I’d feel offended, but…)

2 Responses to The Five U.S. Cities Foreign Visitors Want to See Most