Some Travel-Related Perspective on the Ebola Scare A South African white rhino — endangered enough as it is. Photo by Dennis Cox / WorldViews.

According to recent reports, East African safari tour operators have suffered a 30-70 percent drop in bookings (including cancellations) in recent weeks due to the Ebola scare.

Southern Africa tour operators have been hurt somewhat less, but are nonetheless feeling the pinch.

Here are some (perhaps surprising) facts:

Rio de Janeiro, Brazil, is about 3,100 miles away, just about the same distance as Lusaka, Zambia. 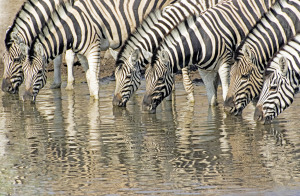 When travelers cancel safari trips en masse for any reason — much less unjustified fears — it hurts African economies and hurts the chances that the wildlife will be protected, as well. Tourists bring in hard currency that goes to pay guides, anti-poaching patrols, park upkeep, and a general sense that protecting wildlife is good for the well-being of the local people.

So Ebola is taking its toll in ways that you might not even imagine.

Doctors who have been combating Ebola outbreaks for decades say the disease is not spread through the air or by water — only by contact with bodily fluids of someone who is symptomatic.

As far as we know, no one in the U.S. has contracted it except for two nurses who had direct contact treating the one patient  in Texas who died (who had been in Liberia).

The World Health Organization has declared Nigeria and Senegal free of Ebola, and they border the afflicted areas.

Neither the World Health Organization or the U.S. Centers for Disease Control are advising against travel to East or Southern Africa.

Yes, Ebola is scary. No one wants to get it. But the chances of coming down with Ebola in East or Southern Africa may be less than living in or traveling to Texas.

Texas has had an Ebola death — safari centers Kenya, Tanzania, Uganda, Zimbabwe, Zambia, Namibia, Botswana, and South Africa have not.

And right now, uninformed fear is only exacerbating the terrible toll that Ebola is taking in Africa.

I welcome your comments.

3 Responses to Some Travel-Related Perspective on the Ebola Scare