Queen of the Mississippi Cruise: A Day in Memphis View of the Mississippi River from Memphis with bridge to Arkansas. Photo by Clark Norton

With almost 24 hours in Memphis before our boat, American Cruise Line’s Queen of the Mississippi, was due to embark on its voyage down the — you guessed it, Mississippi — to New Orleans, we had a long list of possible things to see and do:

Graceland…Beale Street…eat ribs at The Rendezvous…the Stax Museum…Sun Studio…find the boat dock at the Beale Street Landing (always a good precautionary measure)…have drinks at either the Peabody or Madison hotels, or both…and meet our friends driving in from Chattanooga that day for our own rendezvous.

These are friends I especially like because not only are they very nice, talented artists who love blues music, but whenever they come to visit us they bring us a big box of crispy, yummy Route 11 potato chips, made in Virginia, which is on their route from Tennessee to New York. I’ll call them David and Lyn, since that’s their names.

But before we could rendezvous with our friends, we had to check into our hotel, which has the longest name for a hotel I can ever recall: The Holiday Inn Express Memphis Medical Center Midtown. By the time I got the entire name out to the airport taxi driver, we were almost there.

David and Lyn were held up a bit by a snafu on the Interstate that made them get off the highway and wander around aimlessly for a while, perhaps in a neighboring state, but they picked us up around 1 pm beneath a shade tree not far from the old Sun (Records) Studio, where Elvis cut his first recordings from 1953 to 1955.

The first order of business was lunch and we had a great one at a restaurant just off the pedestrian-only section of S. Main Street called Felicia Suzanne’s; we sat in the back garden (the front entrance is on Monroe Street) and drank 25-cent martinis, a Friday lunch special. They were small martinis, to be sure, but a $10 martini at that rate would be 40 times that size and enough for ten people. I had crispy oysters, my wife, Catharine, had fish tacos, and David and Lyn had salads. I forgot to mention they’re vegetarians, not that there’s anything wrong with that, though it didn’t bode well for ribs at The Rendezvous.

David made up for it with some daring driving — U-turns R Us — and parking karma that I can only dream about, enabling us to see far more of Memphis than we could have on our own, especially without a car that makes U turns on a dime.

After lunch we made a brief stop at Sun Studio, which offers a small tour, snapping photos and picking up souvenir T-shirts. 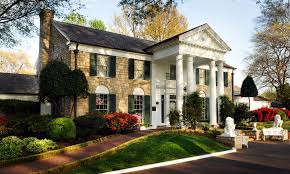 Graceland, Elvis’ home in Memphis for more than 20 years. Photo courtesy of Graceland.

Due to time constraints, we ended up doing a drive-by of Graceland, though David stopped in front of it so we could get a good look at the house and grounds over the stone fence. The first thing we noticed was the unremarkable neighborhood it occupied,  near a string of strip malls, auto repair shops, decaying motels and fast-food joints that seemed to run on forever.

Of course, when Elvis bought it back in the mid-fifties, it was no doubt something of a country estate. And the grounds are spacious and beautifully kept. The house itself seemed surprisingly modest, and would probably be swallowed by any number of today’s McMansions. Tours are available, and you can choose among four different price levels, running from one to three hours.

Across the street was the Heartbreak Hotel, which usually requires reservations well in advance, perhaps because it has a zippier name and location than the Holiday Inn Express Memphis Medical Center Midtown, which is, however, convenient to any number of hospitals.

But our destination was the Stax Museum of American Soul Music, which none of us had ever visited. Housed in an old theater, Stax Records was formed in 1959 and released recordings by previously unknown soon-to-be-star soul performers like Isaac Hayes, Otis Redding, the Staple Singers, Wilson Pickett, Booker T. & the MG’s, Rufus and Carla Thomas, and many more, before dissolving in 1976.

One of the world’s only museums devoted to soul music, Stax also has exhibits on other stars like Ike and Tina Turner, Aretha Franklin, The Jackson Five, Sam Cooke, James Brown, and Ray Charles.

Each major performer or group has an exhibit devoted to him, her or them, and there are a number of old videos of classic performances playing throughout. You can see Isaac Hayes’ elaborate stage costumes and gold-trimmed Cadillac, the Soul Train stage, and a replica of the Stax recording studio. We closed the place after spending a fascinating hour and a half or so down boomer memory lane, and headed off to the Peabody, Memphis’ most famous hotel, known for its ducks that parade through the lobby.

Our goal was to have drinks in the lobby or on the rooftop. But the lobby prices were prohibitive and the rooftop was a colossal disappointment. Despite an advertised happy hour, there were only a few scattered (and fully occupied) tables, with drinks served in plastic cups. The view wasn’t even very good standing up. Sun Studio, Memphis, where Elvis got his start. Photo by Clark Norton

So we headed over to the nearby Madison, which proved to be the right decision. The Madison rooftop, closer to the Mississippi, was a classy space, with marvelous views of the river and comfy couches to sit on. With (less expensive) drinks to sip and hummus and pita bread to nosh on, we watched the sun set over Arkansas across the water, and could even spot the Queen of the Mississippi at the Beale Street Landing dock, so we could check that off.

I neglected to mention earlier that David had found perhaps the only available parking spot within miles of downtown Memphis on a Friday night, when fans were streaming into the local minor league baseball team’s stadium for a home game and Beale Street — which we passed on our way to the Peabody — was hopping. So we were anxious to get back to Beale Street and join the action.

The liveliest section, packed with clubs, bars, restaurants and souvenir shops, was blocked off to cars and with pedestrian-only access for Friday night. After showing ID and getting frisked, we wandered down the cordoned-off blocks that were alive with people — families, couples, people of all ages and races — having fun. Young men were doing acrobatic flips down the street and passing the hat. One couple were dressed as super-heroes. A big crowd was listening to live music from a stage just off the street. Every establishment — from B.B. King’s to Jerry Lee Lewis’ clubs and lesser lights — was packed.

Having long since given up my ribs-at-the-Rendezvous fantasy — the noshes at the Madison had taken the edge of our appetites anyway — we ended up sharing plates of fried green tomatoes and having cold beers on a deck overlooking Beale Street, starting to fade after being up for 19 straight hours.

The next day, Catharine and I would head off on our cruise and David and Lyn would begin a week-long blues tour down to Mississippi, but for now, we were sad to say farewell to Memphis…but still have Graceland and ribs to look forward to in the future.

Note: For 50 things to see and do in Tennessee, this list from Your RV Lifestyle is extremely useful.

Next up: Cruising to Vicksburg and Natchez, Mississippi, aboard the Queen of the Mississippi.

5 Responses to Queen of the Mississippi Cruise: A Day in Memphis