Notable New Cruise Ship Features to Entertain and Wow You

Royal Caribbean’s Quantum of the Seas should wow cruisers with its “virtual balconies” offering sea views to occupants of inside cabins. Photo from Daily Telegraph.

At the “What’s New in the Cruising World” industry trade seminar at the New York Times Travel Show in Manhattan this weekend, representatives from six major mainstream and premium cruise lines talked up some innovations that cruisers can expect to find on their latest ships in 2014.

The six did their best to try to wow travel agents (and some from the media) and get them fired up to sell and promote the new cruise season, which should be of interest to many cruise-loving baby boomers — and to some new cruise converts as well.

The innovation that impressed me most was Royal Caribbean’s “virtual balcony,” coming to its Quantum of the Seas ship scheduled to debut later this year.

What’s a “virtual balcony?” Well, if you choose an inside cabin — the least expensive option on any ship because you have no view other than the walls — you can now have that view, thanks to the wonders of technology and some creative thinking by the cruise line.

The virtual balcony floods one floor-to-ceiling wall of your cabin with what appears to be natural light — and, even more remarkable, simulates the outside view that someone with an actual balcony would have at that moment. You can also hear the sounds of the sea — and shut it all off at night (or anytime) if you wish.

The idea is to attract first-time cruisers with inexpensive rates who might be reluctant to book an inside cabin because of the fear of claustrophobia or of just missing out on the views. I’m not a big fan of mega-ships like the Quantum of the Seas, but I would gladly hop on board just to try this inviting new gimmick out.

The Quantum of the Seas will also bring bumper cars and a skydiving simulator to the high seas, as Royal Caribbean continues to be the leading innovator in onboard cruising activities.

Speaking of simulations, MSC Cruises offers a Formula One race car simulation on its new MSC Divina — “you sit in real cars, and with screens all around you, you feel like you’re actually moving and driving in a race,” the MSC representative said, adding that he crashed several times when he tried it. The “race” lasts seven minutes and can be yours for just $9.

On Norwegian Cruise Line’s latest ship, the Norwegian Getaway, you can dine while watching the show at the Illusionarium, which features magic and various illusions (“It’s a little hard to explain,” the Norwegian rep admitted, but that made it even more intriguing). Both the Getaway and the recently introduced Norwegian Breakaway sport a quarter-mile-long promenade called the Waterfront, replete with multiple places to eat, drink and soak in the ocean views.

Carnival Cruise Lines, which has always had great casual dining options, is touting its “Guy’s Burger Joint” eateries — the “Guy” is the Food Channel’s ubiquitous diner-diver Guy Fieri — and you can load up the burgers any way you want, complete with Guy’s “donkey sauce” (a secret mayo concoction) and spicy onion rings.

Celebrity Cruises, in turn, has restaurants where you can order off an iPad. My experience with this type of ordering in the Philadelphia airport was that it required several full-time employees to explain this theoretically labor-saving device to confused customers, but eventually people may figure it out as they become more accustomed to using tablets. Celebrity has also partnered with Bravo’s Top Chef franchise to bring you Top Chef at Sea, which will star some of the show’s “cheftestants” and their dishes on four voyages this year. 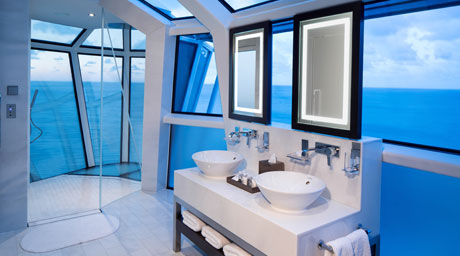 The sea view bathroom in the Reflection Suite on Celebrity’s new ship, Reflection, has a shower extending out over the sea. Photo from Celebrity Cruises.

The Celebrity rep also showed pictures of a giant shower in the sea-view bathroom of the Reflection Suite, the top suite on its new ship Reflection. The shower extends out over the ship and appears to be totally transparent, but “only the fish can see in,” and the shower walls darken anyway, the rep assured the assembled audience of travel agents and press. “Twenty of us were able to squeeze in at one time,” she added, “but we were fully dressed.” So if you book the Reflection Suite, you can probably expect plenty of company.

Princess Cruises’ latest ship, the Royal Princess (appropriately christened in 2013 by the Duchess of Cambridge, Kate Middleton) offers the adults-only “Sanctuary,” a place to find relaxation and quiet for just $20 a day. The Royal Princess also has a dramatic Sea Walk, which extends out from the ship with glass floor to look down at the sea — not for the acrophobic.

I’m glad to say that the Princess spokesman also talked about the cruise line’s attractive Alaska cruisetours (combination cruise and land tours featuring Princess lodges) as well as notable shore excursions in the 49th state, such as helicoptering onto a glacier with dogsledding on the side.

Sometimes you just want to get back to cruising basics — as much as I love the ideas of sampling the virtual balcony, the Illusionarium, and Guy’s donkey sauce.

What percentage of the U.S. population has ever taken a cruise?